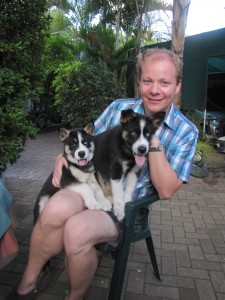 The top dogs in my life.

After literally weeks of waiting for a fence to be completed outside our house our two Siberian Husky puppies premiered their new “playpen” yesterday. They were like cows coming out for the first time in spring and joy radiated  off them like gamma waves. Needless to say I was the last thing on their minds, so I made my escape and concentrated on work for some hours. Round about five, just as the sun was setting, great cries of agony woke me from a reverie and there they were, standing at the gate of the fence, begging to be let out of the pouring rain resulting from a rather heavy (and scary) thunderstorm. My heart melted then and, as any mother (or guardian) of four-month old babies would do, I let them back into what had thus far been their sanctuary: the garage. I have to admit it was rather ironic that Þór (Thunder) and Óðinn (Fury) should be afraid of thunder and lightning.

Now might be a good time to mention, for those of you who are not familiar with this breed of dog, that they get bored extremely easily and have a lot, and I mean A LOT of energy to expend, so the garage was obviously only ever going to be a temporary solution, especially given the fact that they are very destructive at heart. Ever since they moved in, the garage has literally gone to the dogs!

Today, they were let back into their new, larger and outdoors enclosure of well over two hundred square meters and again the afternoon went into running and playing enthusiastically. But alas, as the sun started to set Þór and Óðinn cried, seeking the familiar shelter of the garage.

“Ignore them” my husband said, rightfully so because we are hoping to have the use of our garage back after having gone through the cost of installing a fence for them.

It’s hard to ignore the cries of Huskies. They sound like baby wolves and, if you would believe it, they actually have tears running from their bright blue eyes. Nonetheless, advised by many to not allow our first canines to manipulate us, we dogged it and soon enough their whimpering died down.

After two hours and when it had been raining thoroughly for at least half that time, I could no longer ignore the fact that they were outside in the cold and wet while we were enjoying the lovely bright heat that modern electricity affords us. So it was that we went out to make sure the little ones are not dying of cold out there.  My husband was about to leave through the back door when I suggested he instead used the garage which, I thought, ought to be the drier route.

He opened the door to the garage and exclaimed loudly. I was short on his heels and soon found out what had been responsible for his surprise.

There in the front of the garage, next to the open door, lay two huskies, all cuddled up together on their blankets, looking up at us lazily and rather blatantly, as if to ask “what kind of parents would leave their children out in the rain?”. Þór rolled over and stretched out, practically demanding a session of vigorous scratching, and all the while I could only think “what if they had run off? They’d be miles away by now!”.

We checked the fence: no holes, not dug or otherwise. The only explanation is that they could have (possibly) pushed under the gate, but as wet and muddy as it is out there in the rain, as white and dry are the soft bellies on our dogs.  It seems in this case we’ll have to let sleeping dogs lie because, at least according to Þór and Óðinn, it’s really a dog’s life out there!

One thought on “A dog’s life”