In 2017 I had the incredible privilege to undertake a great European road trip with my husband and parents. For nearly four weeks, we hopped from country to country, ticking things off our bucket lists at every stop. Mom wanted castles and culture, dad wanted nature and walking, my husband wanted to bump fists with statues of musical greats and visit their homes, my own pleasure is art, literature, fairytales and magic. We all wanted wine, great food and to experience something new together. And we did, everywhere we went.
But while backpacking, or road-tripping, through Europe is the adventure of a lifetime for anyone, what makes it life-altering is not so much about where you go as it is about who you go with. Which brings me to I see London, I see France by Sarah Mlynowski.

The book follows first year college (university) students/best friends Sydney and Leela on their great European adventure.
This is the trip they’ve both been dreaming of ever since they started reading books as teenagers. They have a bucket list of their own to work on, complete with stinky cheese and high tea, but they also have to budget to make it through four and a half weeks of traveling.
Each of them also come to the experience with an extra piece of baggage: Leela is recently broken up with her college boyfriend, with whom she was supposed to go on this epic trip. Sydney leaves behind an agoraphobic mother with her sister who, despite having grown up in the same household, just doesn’t get what it takes to take care of someone who fears leaving the safety of their own environment. The story is told from Sydney’s POV, and everywhere we follow her, so does her guilt over abandoning her fragile mother and teenage sister. But it is only for four and a half weeks, she constantly reminds us, and she said she’d go straight back if either of her selfish family members can’t deal with her absence.
Speaking of selfish, the really selfish person is Sydney’s best friend and travel partner, Leela. Not only does she count on Sydney to do all the planning, but she repeatedly changes her mind about where to go and about who she would or wouldn’t like to share in the experience. That is because, despite the breakup that caused Leela and boyfriend Matt’s plans to fall through, Matt and friend Jackson follow in Sydney and Leela’s wake on a trip of their own. This complicates matters to no end and is also the main plot-twist in the book, because it turns out Jackson is both easy on the eye and an interesting, if not exciting, travel companion, and Matt and Leela have unfinished business. Throw in selfish Leela’s jealousy over Sydney’s new college friend, Kat, and you’ve got yourself a story with plenty of intrigue, twists and turns and a few OMFG moments to boot. But it wasn’t the story so much that had me riveted. Not that it wasn’t riveting, it was. It was just that, truth to be told, once Sydney and Leela started going places, trying new foods and experiencing new countries and cities, I was there again, or for the first time, experiencing Europe as though it was as new to me as to the two characters portrayed in the book. And I thought what a marvelous job Sarah Mlynowski had done with the thing that some would consider secondary to the story; the traveling. At every twist and turn in the book I thought: ‘Poor Sydney! If only she could have done this with her mother like I did,’ or ‘Poor Leela, if only she would see how much work her friend put into trying to make this trip awesome for her,’ and I walked up narrow staircases with them and snapped selfies of great tourist attractions with them and when I put the book down, it was as though I had just returned from Europe again with my family, who had trusted me so completely to plan a trip that on the day we left for Europe, they still had no idea where we were off to. And it was magical and romantic and new and exciting and fun. Lots of fun. Both times.
So if you haven’t done the Great European Adventure yet, choose your travel partner(s) carefully. And read ‘I see London, I see France’. You can call it research. Or you can just experience the great European adventure, which is what this book is. Don’t go to Europe and act like Leela. Be the better friend, the traveler who is open to new experiences, the person who eats the snails even though they look disgusting. And if you ever go see a sex-show in Amsterdam, don’t be the idiot who gets up on stage with the performers. Be the idiot who takes video proof to show that you were there, then deletes it, to show that you care. 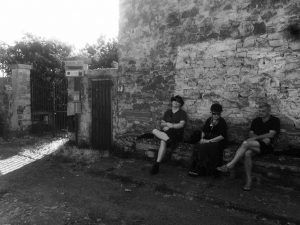 My travel companions, waiting for the bus in Florence, Italy.