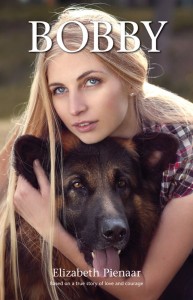 I was introduced to Elizabeth Pienaar at the NB Books Authors’ Party earlier this year. A small, beautiful blonde woman with an open face and infectious smile. She was easy to talk to, even easier to listen to, as she is smart, well informed and a good conversationalist. That was my first impression, before we started talking shop.

What are you working on/getting published?

A new book, about to be released, she said. A Young Adult book called Bobby.

Young Adult? I had read only the week before that a multitude of American authors are suddenly finding themselves ranked as YA writers without ever having intended their work for that market. Did you write it as such? I asked.

She hadn’t, but it had become labelled during the publishing process. Labelled for teens, so it could be sold to teens.

It’s about a dog, told from the dog’s perspective.

Pretty much the perfect elevator pitch, I thought. She hadn’t even needed two minutes. One sentence had me hooked.

In a charming bookstore in the heart of Melville, the lights are on tonight. Laughter flows out of the two entrances to Love Books at the Bamboo Centre on Rustenburg Road. Leopard’s Leap wine glows in every glass. Beautiful food disrupts happy conversation. In the midst of it all is Elizabeth, taking it all in. They are all here for her, but what they really came for is the book. A book, based on true events, inspired by the life of one creature that many would count insignificant. A dog. An animal so easily taken for granted, overlooked, forgotten. For the lucky few who understand, an animal which should never be taken for granted, overlooked or underestimated.

She speaks with mirth about her method as a writer, about discipline and belief. She speaks about Bobby, the real Bobby, with great love, from heartfelt remembrance. She looks with reverence to the couple who gave Bobby his final home. Arthur and Ingrid. They are among the attendees.

When she reads from her book, my signed copy burns me through its brown paper bag. I could have bought it a few weeks ago on Kindle, but then I wouldn’t be reading the real thing. Then I wouldn’t be able to hold the paper copy in my hands with the same anticipation, the same first-read jitters.

I met Bobby on page one. I’d heard about him, read snippets about him, but until I met him I couldn’t have understood the immensity of his presence. Bobby embodies every look, every wag of the tail, every yelp, or bark or whimper of every dog who ever lived. Bobby is the book you read to your children so they can understand the importance of being kind to animals. It’s the book you give to someone who’s been unfortunate enough to have to deal with the loss of a beloved companion. It’s the book that was written expressly to remind us that dogs are not pets, or protectors or mere companions. Dogs are family. And if you treat them right, they’ll love you more than is humanly possible.

Bobby tells the story of a dog who loses his human to death. Afterwards he is repeatedly abandoned by his caretakers until he ends up in a care facility, awaiting adoption or death. Along with so many of his kind waiting for someone to notice them, there is no knowing which of the two will come first.

On the other side of the special barrier, a young girl finds it hard to overcome her grief after losing her dog to Cancer.

Elizabeth Pienaar understands the human condition. She understands what grief is, that everybody deals with it in their own way and that it often defines who we become. In Bobby we have to deal with a new form of grief, a new understanding of our own reactions to the grief of others, whether they are human or not.

Get Elizabeth Pienaar’s fantastic debut novel (R120) at your local bookstore or buy it from Amazon via Kindle. Also available in Afrikaans as Bobbie. To learn more about the author, visit her website at: elizabethpienaar.com